Diego Armando Maradona, who rose from the slums of Buenos Aires to lead Argentina’s national team to victory in the 1986 World Cup, lost his way through substance abuse and then pursued a second career as a coach, died Wednesday at the age of 60, according to media reports.

He reportedly suffered a heart attack at his home in a suburb of Buenos Aires.

Argentina’s 3-2 victory over West Germany in 1986 made Maradona a national hero. While Maradona did not score in the match, he is credited with a pinpoint pass to fellow countryman Jorge Burruchaga who scored in the 86th minute, allowing Argentina to pull ahead for good.

As word of Maradona’s death spread, tributes to the soccer legend began pouring in. 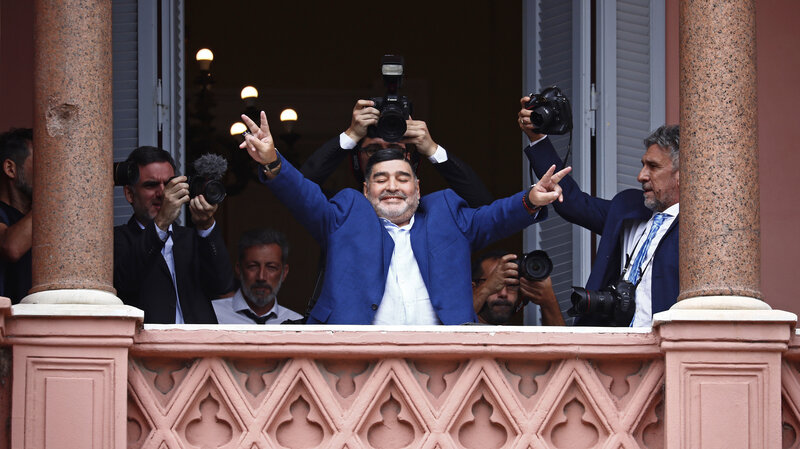 Alberto Fernández, Argentina’s president, tweeted Wednesday, “Fuiste el más grande de todos” or “You were the greatest of all.” His administration announced three days of national mourning in Argentina, according to the Buenos Aires Times.

Maradona, a stocky midfielder who was captain of the Argentine team, was embroiled in controversy earlier in the 1986 World Cup tournament when he scored his famous “hand of God” goal, which many believed he knocked in with his hand. The goal helped eliminate England from the tournament.

Critics said Maradona should have been penalized for a handball violation, but none was called. It remains one of the most infamous goals in the history of the World Cup.

After Argentina’s victory he became one of the world’s most recognizable athletes, rivaling the popularity of Brazil’s soccer maestro Pelé.

At the club level Maradona played for Napoli, earning titles in the Italian league in 1987 and 1991. Prior to that he played for Barcelona from 1982 and 1984 where he scored 47 goals in 75 matches, according to the football club.

By 1991 the soccer star began making headlines for reasons other than his athletics, when he was banned from soccer after a drug test showed traces of cocaine in his system.

After serving a 15-month suspension, Maradona returned to club soccer on July 1, 1992, but he was overweight, out of shape and faced a string of legal woes, including charges of cocaine possession in Argentina and a paternity suit in Italy.

In 1997 Maradona officially retired from professional soccer, the BBC reports, and by 2008 was appointed head coach to the Argentine national team, a role in which he enjoyed less success. During the Men’s World Cup tournament in 2010, Germany defeated Argentina 4-0 in the quarterfinals.

Recently, Maradona suffered from a series of health challenges, including emergency surgery for a subdural hematoma several weeks ago, before being released from the hospital earlier this month, according to ESPN.

Thank you for everything, Diego pic.twitter.com/bJ9l3ixY7A

View all posts by